Hello world. Or: The story so far

So, with a delay of more than four weeks, I start the experiment of blogging! I am here in Turku since August 25 and some nice things have already taken place. In this blog entry I will try to give you a short overview on what happened so far. But I guess that more detailed entries on some aspects might follow.

It all began around december, when I decided to apply for ERASMUS in Turku. After some time of waiting, I got the confirmation and started to plan all the things that have to be planned, you know that stuff. The really »hot« time began a lot later, let’s say in July.

The question was: How do I get to Turku? There were some possibilities to choose from:

Have a guess! I took the long way … So, 19 hours in trains to come to Stockholm and another night in the Viking ferry. 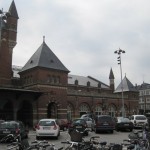 But anyway, that was a cheap journey, I got the trains for ~ 44 Euro and the ferry for 32. And the best advantage was that I could bring as much luggage as I could carry (ok, not that much), including wodka and stuff like that. Plus it was intersting to see Danish as well as Swedish (X2000) trains. After I arrived to Stockholm, I was lucky to catch the bus to the habour that just left like three minutes after I found the right bus stop. Check-in to Viking ferry M/S Arorella was easy and I was happy to find my cabin to get some rest. In the morning I tried the shower and from 7 am I watched the beautiful archipelogo in front of Turku. Just amazing. Finally I arrived to Turku at 7:35 in the morning of a sunny 25th of august. But luckily my tutor (hi fav!) was already waiting for me. She had organized the keys to my apartment and brought me there.

I must say that I live far away from the city center, and furthermore, my suburb has some strange image. That’s why at least some people react a bit shocked when I tell them that I live in … Varissuo! Well, so far, nothing strange happened to me. And I don’t live in the deep Varissuo, but just at its beginning. I walk one minute to bus stop and shopping center and bus connections to the city center are really good. So, all in all, I think that I can’t complain. At least so far.

After a few days of managing some basic stuff (university enrollment, bank account, starting package, …) and exploring the city, we had an orientation course where they told us some important information about how studying here will work and so on. I found out, that most of my courses that I hat chosen don’t take place now, but in spring semester (that was the good part) or were totally cancelled for this whole year (and that the bad news). So, what to do? Right: Look for alternatives. Fixing a timetable here is not easy, because there are some normal courses that take place every week, but then there are also block courses. And their timetable are completely chaotic. Might be that they take place like every friday, but also that you have two lectures on  fridays and then one lecture every day of the week. That usually causes overlaps with the other courses. But after a while I found some courses that should all fit. So, at the moment, I am doing these courses: Knowledge about Finland; Suomea ulkomaalaisille: teksti- ja sanastokurssi (Finnish for Foreigners: Text and Vocabulary); Suomea ulkomaalaisille: jatkokurssi I (Finnish for Foreigners: Continuation Course I); Baltic Sea Region Studies: Culture, Art, Imagination, Baltic Region Dynamic and Challenges; Gespräche zwischen Heiden und Christen; The Social Web; Swedish-speaking Finns as a Minority: Sociological Perspectives.
End 😀

Ok, let’s say this entry is done. Of course a lot more happened since I am here, but I might write about those things in seperate entries.

Disclaimer: Okay, this was my very first blog entry ever, so don’t criticize it too much! But of course, comments are always warmly welcome! 🙂